Went on a bike ride yesterday with my kid, some other guys, and some other kids.  There used to be a canal running right through the middle of town, about 25' across, maybe 10' deep.  It made for plenty of desperately fabricated tales animated to youngsters in dramatic fashion with the sole intent of scaring them to death before the canal could kill them...or something like that.

About 30 years ago, my wife was convinced by her well-meaning Mother that there are monster-types named 'Grinnie Grinnie GrinTeeth' that live in not just the canal--but any water, anywhere.  Except maybe the bath tub.  Anyway, I don't know if my wife just doesn't remember the name correctly, or if Mommy-In-Law's Mommy had it wrong too, but I'm pretty sure the creature she should  have been completely freaked out by is 'Jenny GreenTeeth'.

If your thinking of googling images of her, make sure the kids aren't around.  Sure, she's meant to be scary, but I'm pretty sure whatever images your kids get in their heads on their own will have much less potential for long term psychological damage than the offering online, and will likely still accomplish your devious designs.

For example--this was one of the pictures that popped up: 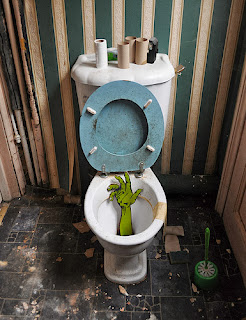 If you're mid-pottie training with a little tike, this photo may complicate things a bit after being viewed by Mr. Poopy-Pants.  Heck, I've never even seen a photo like this, and that image has crossed my mind a few times just at the wrong moment.  The 3 year old doesn't stand a chance.

Where was I...oh, the bike ride.  I'm not sure if it was the lack of interest in the local public pool, or if too many kids were falling in the canal after poking around looking for Ms. GreenTeeth, but the city decided to bury all the water in a 10' 6" diameter pipe, and lay out a nice little bike path on top of it where the watery grave once was--which is where we were riding our bikes.

Anyway, that's all I really wanted to say.  It was a good ride.  I'm sure we'll do it again sometime.

Just a side-note:  While I have a brother-in-law in his twenties who still refuses to get in the water, the GreenTeeth ploy was a complete and utter failure with my wife--which is great, unless there's water anywhere near you, and you have anything other than being in the water that needs to get done.

Some guy by the name of Elbert Hubbard defined self-discipline as follows:

"The ability to make yourself do what you should do, when you should do it, whether you feel like it or not."

After studying thousands of successful people for 11 years, a businessman named Herbert Gray found what he called the 'common denominator of success', which is:

All that being said, Mr. Hubbard was killed when the ship he was on was sunk after being hit by a torpedo fired from a German U-Boat.

Lesson:  No matter how hard you try to be successful, a torpedo will almost always be more successful.

And Mr. Gray?  I don't know what happened to him, but I'm pretty sure it did not involve a torpedo.

Lesson:  It's probably worth pursuing success, because not everybody that tries gets cut short by a torpedo.

Also, I know some of you like to look at pictures, so I Googled a random term--'beautiful'--and this was the first picture that showed up.  Oddly enough, this is a picture of Amy and I on the day we met. 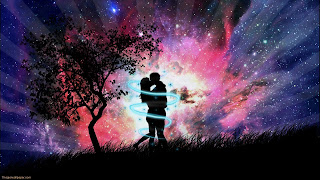 Ding Ding--we have a winner

"She is the cute girl in the red sweat outfit with her legs crossed making one of her silly faces! ;)"

Wow, that was fast.  Winner already.  Indeed she is the lady in red.

Lest ye think me untruthful, here's a picture of your spoils: 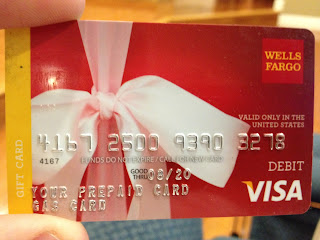 ...aaaaaaand where exactly has she been for the last 181 days?

I know there's something very important I should be saying right now, I'm just having a hard time figuring out exactly what that would be.

So instead of that, see if you can find Amy in this awesome 27-ish year old photo.  First person to comment with the correct answer gets a $25 gift card, with about $4.75 left on it. 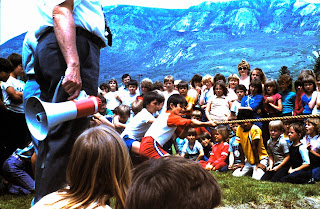 Love,
That cool guy that hijacked her blog

P.S.  A hint:  She is NOT holding a red and white megaphone(although she truly wishes she were--she has a thing for megaphones).
1 comment:

The Origin of My Motivation

If you should ever take the opportunity to go back to school, I highly recommend taking a CLSS 1000 class. It is a Learning Strategies class, and I absolutely love it! It was one of those classes that I had to take to get the English class I needed, to fit into my schedule. To be honest I totally thought I would end up dropping it. I kept looking for other options. Then I actually started the class. The whole thing is based on teaching you to understand the sort of learning strategies that would work best for you. It is centered around learning based on reflection....taking the lessons and reflecting on how they apply to you. This is the most effective way of learning, and helps you become much more self aware. Our assignments are awesome. They are super free. We can write, or create projects...anything we want to get the most out of the experience.

I have absolutely loved this class so much! In fact, my professor is the head of the UV Mentor program and has talked to me about becoming a part of it.  I would get to mentor classes at school and become a part of a program that leads to getting a Leadership & Service title on my diploma....along with a full ride scholarship! Yeah, I think that sounds pretty darn good to me! :) Next fall I will take the follow up to this class and then in the Spring I will apply to be in the program!  My professor has also asked me to consider being a presenter at a large conference for the school this Summer. Oh my! Totally intimidating, but seriously awesome!

Anyway, I just wanted to share one of the projects I created for the class. It is a short slideshow representing the sources of my motivation. It was fun to create and reminds me to stick with my goals and plans...and why I keep going when sometimes it gets a little overwhelming and I wonder what in the world I am doing with so much on my plate! :) The music is an original song by my insanely talented brother in law, Brian Cook. Man alive, I love everything he does on the piano!

Email ThisBlogThis!Share to TwitterShare to FacebookShare to Pinterest
Labels: Back to School, Motivation

A Shout Out From My Home Away From Home 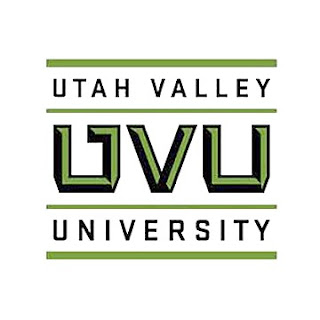 Welp, I am officially past midterm of my first semester in college! It has taken me a while to get into a serious groove, with kids and home, work (more on that later), full time school for both Ryan and I, church callings and a million other responsibilities, unfortunately blogging had to take a serious back seat. However, over this last few weeks I have been seriously missing it. It seems that when a few months go by and you haven't made a single post, you teeter on the edge of permanence. Will I be back, or will I leave this part of my life in the past. The latter made my heart hurt every time I thought about it, so I decided to give myself the time I needed to adjust, so I could make time for blogging a priority again. I will say, Pinterest has kept this little blogging world of mine crackin! Holy smokes! I return to find that OurLifeUncommon has far surpassed the 1 million views mark...and that is just over the last year! That is crazy! YourLifeUncommon is inching up on the same. I have had to put on hold many offers for giveaways, guest posting, etc, but I look forward to looking into some of them to see if they are a good fit for all of us.

Anyway, I just wanted to peek out from under my pile of craziness for a moment. Just to let you all know that I am still here and have intentions to return. Thanks to those of you that have sent such sweet emails over the past few months! They absolutely inspire me and remind me why I love blogging so darn much!

I absolutely LOVE being back in school and I could shock the britches right off my high school teachers AND my parents with the grades I am getting right now! :) Who knew all I needed was a little focus and a lot of passion for learning to get A's?! Probably everyone but me! :) I absolutely GEEK OUT on my Psychology class...which is probably a good thing, since Psychology is my major! I promise, I will work the function of the brain and how it affects human behavior into any conversation, and probably drive everyone crazy! I can't help it! I LOVE IT! I seriously giggle through class because I just can't get enough of it! We will see how I am feeling about it as the classes get even harder, I guess! :)

Alright my friends, thanks for hanging in with me! Now I have to get back to 2 chapters of Math, a Psychology and English paper, all before I race to beat the kids home from school in a few hours.

A little Housekeeping: If you have noticed that the YourLifeUncommon.com direct address isn't working, you are not alone. It is annoying, but apparently we have overloaded our host. Ry and I are in search of a new one. For now yourlifeuncommon.blogspot.com and thewondertwins.blogspot.com are working just fine! Good ole Blogger! :)
No comments:

Email ThisBlogThis!Share to TwitterShare to FacebookShare to Pinterest
Labels: Back to School

Ok, guys! Here is a great opportunity to make a huge difference with way small effort!


A friend of a friend started an organization called Days for Girls. If you have read anything from my friend Mitch Weight's organization, called Sahbu, then you have heard about some of the things these little girls do to try to earn money for school (prostitution, etc), their only hope of escaping. There are little girls that feel this is their only option! But we can totally help give them hope through organizations like this! There is a contest going on and "Days for Girls" is so close to winning, they are a little behind and they totally need help! If you can donate even just $10, it could mean that this organization will become sponsored by NIKE! That is huge! The PR and the difference that can be made is huge! So PLEASE click on the link and give! Just $10 and it will make a huge difference! Remember Mitch has learned that it only costs $120 to send a child to school for a year and these little girls are selling their bodies for pennies to get to that amount! Surely we can do our best to save these sweet girls! 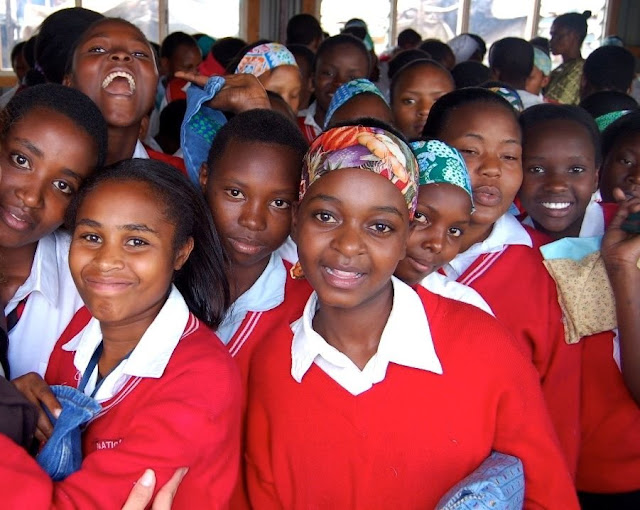 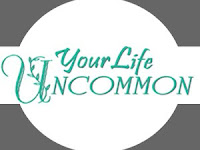 Click here to learn how to add this button to your blog sidebar!

The Origin of My Motivation